I’m writing this while listening to the music of Prince…so sad. A true artist that will be missed.  Just to tie this in with the subject, it is okay to play the air drums, dance a little bit, or mouth the words to a song while you’re lifting. I do it all the time. Just don’t sing out loud, that falls under “bad gym etiquette”. 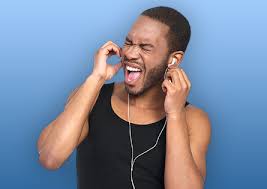 Okay, where were we? Last time we covered sweat, re-racking weights, and equipment sharing. So, let’s start today with smells. Obviously, horrendous body odor goes without saying, they make soap and deodorant and toothpaste for that, so if this applies to you, please stop at the store today and get some. Also, if last night’s jalapeno poppers seem to be an issue this morning, let’s try not to gas the room and make us all regret coming to the gym today. On the other end of the spectrum is one that seems to take some by surprise, although I don’t know why, and that’s the abundant use of perfume/cologne. The gym, quite simply, is no place for those. Imagine this. You’re on the elliptical doing your HIIT training, running some fierce ‘I’m being chased by a bear” sprints and then desperately sucking wind in between them (that’s the worst part of cardio, although I hate all parts of cardio, trying to catch my breath is the WORST, but I digress….) and some guy gets on the elliptical next to you in FULL COLOGNE. Now, perhaps at the bar at midnight picking up babes smelling like the Macy’s perfume counter works for you, but not at the gym, my friend, not at the gym! Suddenly the clean air that I’m attempting to intake becomes clogged with the musky and artificial scent of Axe and I begin to choke and cough as the oxygen is ripped from my body. (Okay, slightly dramatic but you get the idea). This makes me want to grab Mr. Jersey Shore by the unmentionables and drag him from the gym and possibly throw him in a large body of water thereby ridding the world of that smell. I’m not typically a violent person, mind you, but strong cologne and perfume at the gym makes me very untypically angry. Hey, we all have our breaking points. Ladies, you aren’t exempt from this. And no, perfume doesn’t mask body odor, so do us all a favor and if the gym is on your agenda, please, PLEASE, don’t reach for the perfume that day!!!!
Okay, moving on, that one brought out some feelings of unresolved anger for some reason…whew.
So, I’d me remiss if I didn’t talk briefly about gym creepers. Every gym has at least one. You know who I’m talking about. He’s the guy that does his whole workout in front of the adductor/abductor machine. Or the one that follows you around and every time you look up he or she is leering at you. (Yes ladies, you can be considered a creeper, too.) 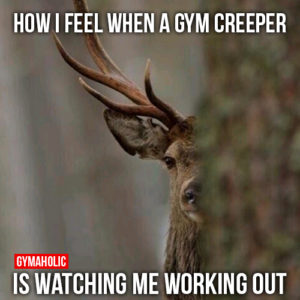 Because I’m not a psychiatrist I won’t go into all of the psychological ramifications of your issues. And yes, for some it’s a serious issue and you should consider some counseling. For the rest of you, I believe you are confusing the gym with Mr. Jersey Shore’s favorite late night hangout, the club. See, at the gym, we go to exercise our muscles, our heart and our lungs. Most of us have not entered the building just hoping and praying we see some action and get picked up that day. Because getting ogled by some drooling nutcase is everyone’s dream, right? If you did go to the gym that day, hoping and praying to hear an awesome pick up line, might I suggest leaving with Mr. Jersey Shore, thereby taking yourself and the pungent aroma of Axe Dark Temptation with you.
It’s been mentioned that there seems to be a lot of naked people in the locker room. (Gasp!) I don’t spend much time in the locker rooms as I don’t shower there or have a need to change clothes at the gym very often nor do I regularly visit the men’s locker room, but I have HEARD stories, strange stories, many of which I won’t repeat due to this being a PG blog. Now, let it be understood that I do realize that it’s pretty hard to shower while fully clothed. However, there are quite a few people that are SO unencumbered by society’s views of public nudity (and I make no judgment regarding the pros and cons of that subject, to each his/her own) that just perhaps they take it a BIT farther than necessary when in a public environment. Some respect might be considered when choosing to bend over to put your socks on while directly in front of the line of sight of another individual thereby leaving them with a visual image which is disturbing and possibly quite difficult to recover from. I think you understand what I’m saying without having to draw a diagram. Eeek. Enough said.
Lastly for today, we’re going talk about equipment hogging. This is the person that decides that they need to do a giant set involving 6 different machines, strategically positioning their towel, water bottle, hat, sock, and left shoe on the seat of each station not currently in use. This practice is very similar to a dog marking their territory by lifting his leg and peeing on what he perceives as his. I suppose we should all be thankful the gym hog isn’t a dog. Or how about that focused individual doing dumbbell drop sets with 5 different weight variances and they have them piled up around them for about 45 minutes? 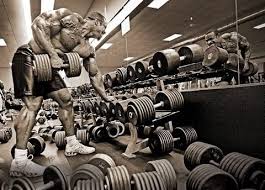 Or perhaps the person that does a set on the chest press, then during their rest period, decides to write the sequel to War And Peace on their phone? (Now, I have to be honest, I have been known to text in between sets from time to time. I know, I know, but my music is on my phone and it’s right there so if a text comes in I hear it, sue me. That being said, it does NOT lengthen the amount of time I have already planned to rest between sets. This is quite different from the NOVELIST that I am referring to.) The more subtle form of gym hoggery is the dude doing BICEP CURLS IN THE SQUAT RACK. The initial perception isn’t of a typical equipment hog, however he IS successfully commandeering two different pieces of equipment, one of which has a use that is CLEARLY not necessary for performing a bicep curl. This individual is, quite frankly, just too LAZY to be bothered picking up the bar from the floor. 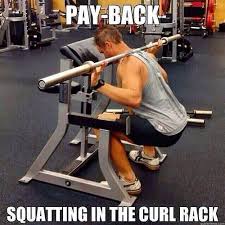 I’m certain we could probably put our heads together and come up with multitudes of other scenarios representing the equipment hog, but I think you get the idea. We all know this particular species of gym-goer and if you are one of them, just be aware that your shoe on a piece of equipment you haven’t used in 25 minutes has a good possibility of ending up in the men’s locker room shower and based on our previous discussion of what happens in there, retrieving it might not be pretty and perhaps even leave you psychologically scarred.
Alright, that’s enough for Part Two…stay tuned for Part Three, and possibly Part Four, based on my inquiry into things people consider poor Gym Etiquette. Apparently, there is a LOT of material to cover! Until next time, be respectful of others, share what doesn’t belong to you, and keep your clothes on. If you can’t do those things might I suggest Zumba home video workouts and Insanity in your garage?