Are you someone that turns your head to look at yourself whenever you come within a stone’s throw of a reflective surface? Do you gaze at your reflection as you walk by a plate glass window? (You know you do, you’re not as sneaky as you think!) Do you always, at some point while shopping for hair gel at Target, end up in the mirror section and find it a struggle to leave? Do you secretly check your teeth in the knife at a fine dining establishment (yes, my friend, that’s you!) or make sure your hair is in place while talking to someone wearing mirrored Ray Bans? If any of these scenarios sounds familiar, then have I got a dream destination for you!! A place where you can exist without judgment or shame! A place where you are, in fact, EXPECTED (gasp!) to gaze at yourself for extended periods of time! What is this amazing place, you ask??? Why, it’s the GYM, of course! It’s a magical place where you are literally surrounded by reflections of yourself. And these aren’t little mirrors where you only get snippets of your reflection at a time. No, these are gigantic mirrors where not only can you see yourself but literally EVERYONE ELSE in the gym, too! That dude picking his nose between sets on the chest press, we see you! How about that girl digging the underwear out of places it shouldn’t be? Yup, we see that, too! (We’ve all done that, by the way, wardrobe malfunctions run rampant at the gym and sometimes you just have to do what you have to do.) There’s nowhere to hide, no direction you can turn to escape. Your only hope of any semblance of privacy is to head to a bathroom stall to handle your business because in the gym, we see it all! HOWEVER, (and of course there’s a however) lest you think this is a narcissist’s dream come true, there is a darker, more nefarious reason for all those gym mirrors. Well, actually it’s not that dark nor is it nefarious but I liked the drama that invoked. The real reason for all those mirrors is so that people that actually GIVE A HOOT about proper form, albeit they can be hard to find some days, can make sure they aren’t doing something WEIRD that can cause muscle imbalances or injuries down the road. Like going knock-kneed when they squat, or doing lateral raises with one shoulder above their ears, or rounding out their back when deadlifting. Of course, there are plenty of people that do those things even with the benefit of a mirror in front of them, but at least they’ve been given the opportunity to pay attention. 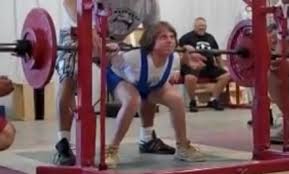 Now, of course this blog is about gym etiquette, but first I need to discuss something that is of the utmost importance that comes into play during a workout and then I will tie the two together. I like to call it GYM VISION. Just think about that for a minute. What exactly is gym vision, you ask? Well, let me explain. Gym vision, as described in the fitness section of Marlapedia, is one’s ability to know what’s happening in the gym at all times, thereby noticing what equipment is being used and by whom, and who’s doing what and where they’re doing it. I know, that sounds super creepy and possibly makes everyone think of the previous blog post and the “gym creeper” scenario. However, this is not the same thing. Au contraire, this is done for a number of reasons. One, so as not to STEAL someone else’s equipment. Two, to keep an eye on the next stop on your workout agenda. Three, to watch for an opening on that particular piece of equipment that is ALWAYS being used because there’s only one of them. And four, and this is a biggie so listen up, so as not to block the mirror being used by someone legitimately watching their form. 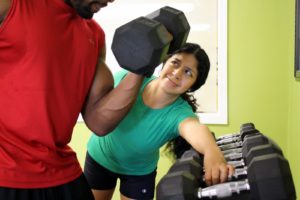 (I’m also going to add another, but this one is simply because I’ve been a trainer more than half my life.) Five, to watch that person on the bench press that is extremely optimistic about the amount of weight they can lift and to be ready just in case they didn’t eat their Wheaties that morning. Yes, I have jumped in when someone is about to guillotine himself and I’ve saved them from what had the potential to be a truly horrific gym injury. Some have been quite embarrassed to be saved by a girl, but it’s better than being beheaded, isn’t it?

Now, there aren’t that many people that have gym vision. I’m not certain if it’s something you are born with or something that is learned from decades spent in the gym. Quite frankly, there are some people that are just hopeless, being so self-centered as to believe they are the only ones in the gym or at least the only ones that matter. The rest of us have to take up the slack created by these narcissistic individuals by mastering the art of gym vision. So, here’s how it works. In between sets, when you’re done texting and taking your selfies, look around the gym. Make a mental note of who is doing what. Like the dude over there handing his skinny little girlfriend a couple of 50’s and teaching her how to do shrugs. Cause that’s clearly what her physique is missing the most, traps. Sigh. Or how about the girl doing the abductor….umm….is she upside down? Wha? After you’ve noticed all the potential gym gifs, really pay attention to the equipment people are using, particularly where you’re headed next. Now do another set…we’ll wait……………good set!  Now, take a quick look around and see where those people were and if they’ve moved on. This really isn’t about creeping on people, it’s honestly just being aware of your surroundings. Kind of like Jason Bourne noticing everything in the restaurant in a few glances.  But maybe not quite as cool as that. 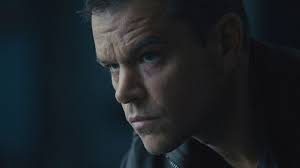 It gives you information to be respectful of someone else’s workout routine while also helping to make yours more efficient. It also helps you to avoid unfortunate run-ins with THAT PERSON. You know who they are, they’re in every gym and there are just some days when you’d rather not…

Now that we know what gym vision is, let’s use your newly acquired skill as you’re heading to the dumbbell rack to do some bicep curls. As you walk over there, you notice a guy doing front raises and watching his form in the mirror. Oops, change direction a bit, you don’t want to walk in front of him, that would be rude. So, going behind him, you then pass in front of a guy resting in between sets of curls, and head to the rack to pick up the 120’s. (Whatever, it’s just a pretend scenario so you might as well go for it, right?) Now, on your way over you noticed a girl doing some upright rows with the EZ curl bar. She’s standing behind the benches and not directly in front of the mirror but she’s still using the mirror to watch her shoulders. She’s right in front of the 120’s though!! OH NO! You’re super pumped for your curls! What are you gonna do?? You’re gonna wait a second, that’s what. Let her finish her set, then grab your weights and move to the side so as not to block her next set. Why? Because she was there first and that’s being respectful of her gym space. And if you’re freaking out about walking 5 feet with the 120’s, or you find yourself irritated that someone else is in the gym that day besides yourself, then you probably should consider moving down to something you can handle. Like maybe the shiny chrome ones over to the side, or the ones in the Group X room in the pretty colors or the ones in your garage…at home.  Seriously, it’s NOT YOUR GYM. 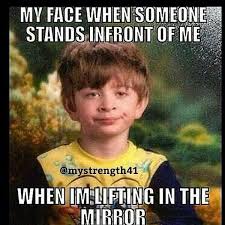 Always be respectful of everyone else’s time at the gym. Your name isn’t on the door and you don’t pay the light bill. It doesn’t matter what you think of someone else’s workout, they have a right to do it even if it doesn’t make a darn bit of sense to you. And if your name IS on the door and you DO pay the bills, then that’s an even bigger reason to treat everyone working out with respect, right? There’s literally no scenario where being rude and self-centered looks good on you. And that’s a general rule in and out of the gym.
Okay, that’s enough for today. Off you go into the world to practice your gym vision. There’s probably going to have to be a Gym Etiquette Part Four by the way, this subject just seems to grow with every visit to the gym. Unfortunately, the ones that need to hear it the most don’t do much reading unless there are a lot of pictures so I’ll throw some in for good measure….Until next time!