You know what’s frustrating? When someone tells me they want to start competing and ask my advice about how to get started and I tell them that there’s a lot of diet misinformation out there and I STRONGLY warn them before they ever start to NEVER fall for the pitfalls of old school prep (no carbs and hours and hours of cardio). I tell them that it’s a great sport and can be an awesome experience but if they do prep that way then they’ll most certainly regret it and it’s not worth the plastic trophy to watch your body blow up post show because it’s been STARVED for months on end! And you know what? They DO IT ANYWAY because some ridiculous “prep coach” told them that’s what they need to do to get on stage. No, it’s NOT what you need to do to get on stage. It’s wrong, it’s harmful, and it is devastating to your existing muscle as well as squashing any hope of muscle gains. Prep isn’t easy on your body anyway but if that’s what it’s going to take for you to get stage ready then you’re not PREP ready! This happened to me and it’s no joke. And just so we’re clear, I’m not a special case, this has literally happened to SCORES of competitors. A lot of competitors don’t even like to talk about it because they think it’s embarrassing. We’re supposed to be specimens of fitness all the time, right? I’m not being overly dramatic and I’m not exaggerating. I’m being REAL and trying to save you from a whole boatload of awful stuff. My only excuse for participating in this ridiculous prep diet trend was because it’s what everyone was doing when I started competing and NO one told me the downside. In fact, no one ever so much as hinted that there would be a negative impact on my body! On the contrary, I was told by my supposed “professional” coaches at the time that it was normal when, 2 days after a show, I was literally SLOSHING when I walked, my ripped legs turned into tree trunks with no visible knees or ankles and I had fingers that wouldn’t bend because they were so swollen. NORMAL???? No, that is in no way normal. I remember girls laughing about how they gained 25 pounds in the first 5 days post show, like it was some badge of honor or something. 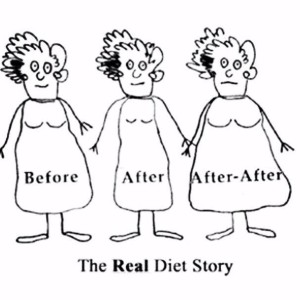 They were all STUPID. I was naïve and stupid and I’m a trainer! I know better! But this is for a competition so normal nutritional rules don’t apply, right? That’s what got me. Prep dieting was new to me so I was learning, thinking I was learning from people that knew what the heck they were talking about because they were well known prep coaches and they put a lot of people on stage that looked great. And I thought I was learning from people that actually gave a crap about me in the long run. I was wrong. I’ve lived it and I learned and I’ve finally come out on the other side. And now I’m trying to help you to not ever have to go down that road like I did. It’s unnecessary and in fact it can be downright dangerous. We’re smarter now. SCIENCE is smarter now. We know more. So why on earth are there still coaches out there immediately yanking all but a smidgen of carbs out of your diet, for MONTHS? So yes, I’m frustrated that there are still “coaches” out there selling people a line of goods. Please pay attention! When someone who has been around the block a few times tells you vehemently to proceed with caution, LISTEN! Don’t just believe a prep coach because they have a lot of clients. This is your life, your body, and your health, not theirs. And there are coaches out there doing it RIGHT! There are real coaches that actually care about your health. And if you’re hell bent on competing then you need to find one of those. And if you find a coach and their plan for you ends the day of the show, if there’s no post show protocols laid out in detail, then walk away. Trust me, not all prep coaches are created equal. I can’t tell you how many people I have warned about all of this only to see them a few months later and find out that they’ve signed on with some idiotic coach and they are doing ALL the things I warned them about. And doing it with a big smile on their face like it’s the coolest thing ever to be starving their bodies and making these grand nutritional sacrifices like it’s so great to be a part of some crazy club. Quite frankly, it makes me wonder why I even try. It doesn’t really seem like it ever makes a difference. Maybe I shouldn’t waste my time and just keep it to myself. And yet, I adhere to a kind of ‘trainer’s Hippocratic oath’ to do no harm. And in my opinion, not warning someone would be doing harm. It’s like telling someone not to walk off a cliff and they go and do it anyway. All I can do is stand back and shake my head. After it’s all said and done, it’s their choice and I’ve done my part….